Paul Treutler: The location and life in Tres Puntas

From: Treutler (1882)
All the faces of the bar in Tres Puntas painted by Treutler 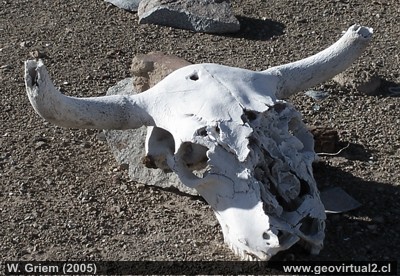 ...At the foot of this mountain range, terraced Tres Puntas appeared, and from there, within a radius of half a mile, the countless mines stretched up to the mountain on which we had descended. After we had looked at this picturesque scene with real pleasure up to the sunset, we hurried there and stayed in the only pub.

Tres Puntas lies under 26° 40´ S. B. and 6066 feet above sea level. The inn was situated in an unpaved place, where pigs and donkeys were lying in a colorful mess covered with rags; numerous ox skulls and dying dogs polluted the air. Our shelter was only a plank house, into which the icy evening breeze found free access through large crevices in the walls. After we washed ourselves - for which the water cost two real - and fed in the evening - for a beef steak with eggs and potatoes and coffee we had to pay 10 pesos -
We were exhausted from the journey, wrapped in our blankets, and we looked for a place on the ground to strengthen ourselves by sleep for the next day's work.
As soon as we fell asleep, however, the rooms were gradually filled with officials from the mines, with harp and guitar maids; playing, singing, and dancing began, and the champagne flowed in torrents. As unpleasant as this touched us, we couldn't avoid the intrusive invitations and had to take part in this party, which lasted until the morning. But even then, when everything in the house had become so quiet, we couldn't find sleep. The whole village and its neighborhood were undermined by silver mines, where more than 1000 miners worked day and night. We were inevitably shocked by the continuous thunder of the blast shots and the constant earthquakes.

Early in the morning, when it was still freezing cold, we went outside and walked through the place to get to know him better. The same consisted of about 80 huts built partly from boards and partly from palm bark. If the square was already dirty, the streets were even worse. They sank in the sand half a foot deep, and even bigger masses of rags than we noticed yesterday were lying around everywhere. On closer inspection, I found that these rags were just dirty laundry; because since a new cotton shirt cost 6 Real to wash here, but a shirt as a result of the expensive water cost 1 Peso, so there was a general habit of throwing the shirt as soon as it was dirty, just like all other laundries on the street and buying a new one. Nobody thought about cleaning the streets. Since the wood was also costly, they used to enclose and fence the ox skulls with the horns, which were stacked on top of each other. Since new skulls were delivered daily by the butcher, this offered not only a very disgusting sight, but the exhalation also polluted the atmosphere in a very unpleasant way. The houses were all painted white, as in Copiapó.

There was also a chapel here, but there was little morality in this place, and the population did not come to holy mass or confession, nor did they marry each other or let the children be baptized, so the priest who had been here at first, to avoid starvation, had been forced to leave the place.

More than a hundred careless prostitutes of the female gender lived in this small town, who did not only come from the Republic of Chile but also from the neighboring republics after this eldorado. On the other hand, there were few married women here, as the merchants, grocers, barkeepers, and dance club owners generally could not expect him to accompany them into this desert among such scum of people.

The central part of the buildings were shops of all kinds where clothes, food, mining tools, etc., were on sale. Other houses were dance and pubs, gambling rooms, and a large part of the house was inhabited by prostitutes. The miners all lived in their mines and only came here on Saturday evening, where they literally flooded this place and stayed until Sunday evening to get their hard-earned money through.

A judge was also stationed here, who had an officer and ten soldiers at his disposal to maintain order, but the servant of justice had little or nothing to do; he lived mainly only for the game and the wine.


The original texts were digitized, converted to ASCII and edited by Dr. Wolfgang Griem. Sketches and drawings are digitally cleaned.

The original texts were digitized, converted to ASCII and edited by Dr. Wolfgang Griem. Sketches and drawings are digitally cleaned.