The ruins of Juan Godoy in Chañarcillo (2) 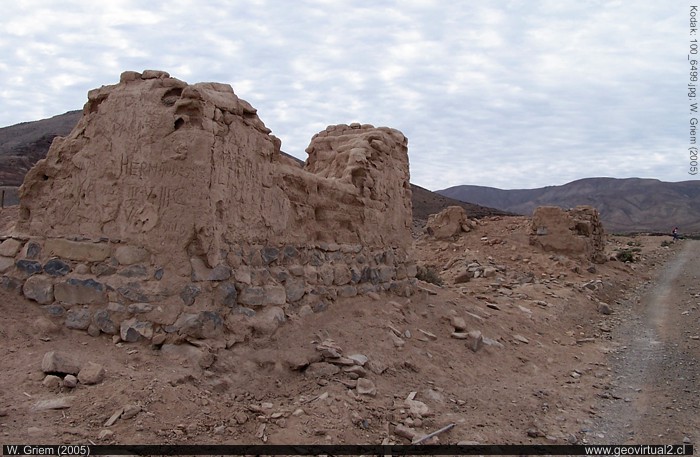 Juan Godoy discovered the famous Chañarcillo silver deposit in 1832. In the following years, a strong exploitation of the rich veins began. Sometimes they found silver in its pure form or very high grade veins (here). Juan Godoy village was formed near the mine. In 1858 the railway line of Caldera - Copiapó - Pabellón  to Juan Godoy arrived. (here)

Vetiform mineralization had extraordinarily high silver grades. Chañarcillo was the third largest silver deposit worldwide. Names of mines such as "Delirium" still show the spirit of the epoch. The riches of the site supported the region in a considerable way in its development. The gains allowed a large part of the country's external debts to be repaid at this time.
(see pertenencias and name of the mines)

But the rich areas were quickly exploited and production dropped considerably. In addition, the mine was filled with groundwater because of a blasting accident in 1888. At last all the mines were closed. In 1932, only one miner remained in this area. Chañarcillo's abandonment between 1890 and 1905 has several reasons:
1. Depletion, deepening and technical problems in mines.
2. Extreme fall in the price of silver on the world market due to changes in the monetary system.
3. New deposits - large and low-grade (= metal content) such as Elisa de Bordos.

Any new publication not authorized by the authors is expressly prohibited. This applies in particular to electronic publications:  Usage guidelines.
If you have old photos or other (historical) material of the Atacama region, we would be very pleased to implement this in our pages: Contact