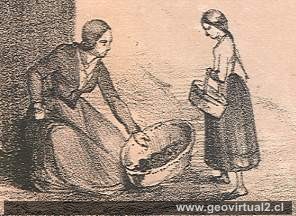 Especially mining caused a social conscience in the people, more than in other areas of the era, the scope of social security, working time and labor law - mining showed a vertical social mobility that for many people in this era was a threat:

Political parties:
In Germany, Europe, and Chile, the first socialist or social-democratic movements are formed between 1850 and 1870, which can answer the increasing importance of social questions in society. In particular, democratic-liberal principles are gaining in popularity in large sections of the population. Humanist, socially-oriented, and liberal attitudes are gaining ground, especially in the working class, and in other social classes, especially in universities. A humanist, socially-oriented and liberal attitude is gaining ground.

The unions:
The founding of the first unions had many causes and different goals: safety in the mine, acquisition of adequate equipment, reduction of weekly working hours to a bearable level, the introduction of social security, adjustment of wages, and of course, the general improvement in working conditions for workers - employees and operators.

Wages and salaries
Wages were, of course, an important point. At that time, we could find extreme salary differences in the different occupational groups. But perhaps an even more critical issue was the form in which some companies paid wages. As Paul Treutler describes (see here), some mines had their own shops called "Pulperias." These shops sold some goods to the workers and employees at excessive prices and deducted the outstanding invoice from their wages. As the mines were working in very remote areas, there was often no alternative. In this form, mine owners were able to profit from the overpriced sale of goods in the mine on the one hand, and on the other, they had significantly lower labor costs. In this form, the workers were also bound to the company because if someone had debts in the factory shop, they could not change the company. Often, however, employees had to spend more in the "Pulperia" than they were paid for a month. A few years later, this "Pulperia system" was further refined: In the saltpeter mines (Northern Chile), the companies only paid out wages in some cases in tokens, which were only valid in the company's shop. An excellent idea shows the remuneration table from the Descubridora de Chañarcillo mine from 1853 (Lloyd, 1853). Suppose the administrator is set to 100% when normalizing. In that case, it is easy to see that the wages were very different: miners have received only 5% of the administrator's wage in some cases (a comparison today would be about 6000 euros - miner 300 euros). (See Descubridora Mine)

Germany, Europe, and Chile, between 1850 and 1870, were founded as the first socialist/social democratic parties that responded in a political way to changing society. Especially the liberal democratic thinking is gaining in large parts of the population sympathy. In the working class and the upper strata, a more humanistic, supportive, and liberal ethic is born.

Table below:
List of salaries of personnel working at the discovering mine of Chañarcillo (Lloyd, J. A.). (1853):

In conclusion: What has changed in 160 years?
The somewhat embarrassing answer is: NOT MUCH! If we calculate the salary of a person in a higher position in mining ("administrator"), we arrive at a salary that is currently the minimum wage in Chile. The magnitude of the gap between high and low wages in 1851 is almost reflected today . . . .


Labour law and child labour:
Unfortunately, in almost all historical mines it was common practice to include children in the hard work process. This is how Friedrich Engels described the situation in English mines:

"In the coal and iron mines, which are exploited in roughly the same way, children from 4,5,7 years old work; most of them are over 8 years old. They are used to transport the broken material from the quarry site to the horse track or main shaft and to open and close the tunnel doors that separate the various departments of the mine when passing workers and material. These doors are usually supervised by the smallest children, who have to sit alone for 12 hours a day in the dark in a narrow, usually humid aisle without having to do as much work as is necessary to protect them from the dulling and boredom of idleness.

The transport of the coal and the iron stone, on the other hand, is a very hard work, as this material has to be dragged away over the bumpy ground of the tunnels in rather large trolleys without wheels, often over damp clay or through water, often up steep slopes, and through corridors which are sometimes so narrow that the workers have to crawl on their hands and feet. Therefore, older children and adolescent girls are taken for this strenuous work. Depending on the circumstances, either one worker gets onto the runner or two younger ones, one pulling and the other pushing.
Rock extraction, which is done by strong adult or young men aged 16 and older, is also a very strenuous job.
The normal working time is 11 to 12 hours, often longer, in Scotland up to 14 hours, and very often double time is worked, so that all workers are 24, not infrequently 36 hours in a row underground and in activity. Fixed hours for meals are usually unknown, so people eat when they are hungry and have time.
...
The children and young people who are busy carrying coal and iron stone generally complain about fatigue. Even in the most ruthlessly run industrial plants, we do not find such general and extreme fatigue of the workers. The whole report provides a number of examples on each page. It happens at any moment that the children, as soon as they come home, throw themselves on the stone floor in front of the herd and immediately fall asleep, that they cannot eat any more food and have to be washed in their sleep by the parents and brought to bed, yes, that they are thrown down on the way with fatigue and are searched for there by their parents deep in the night and found asleep.

Generally, it seems that these children spend most of the Sunday in bed to recover from the week's exertion; only a few attend church and school, and teachers complain about drowsiness and dullness despite all the curiosity to learn. The same thing happens with older girls and women. They are being overworked in the most brutal way. This fatigue, which is almost always increased to a most painful degree, does not miss its effects on the constitution. The next consequence of such excessive exertion is that all life force is used up to the one-sided training of muscles, so that especially the muscles of the arms and legs, the back, the shoulders and the chest, which are mainly put into action during towing and pushing, receive an extraordinarily lavish development, while the rest of the body suffers from a lack of food and cripples."